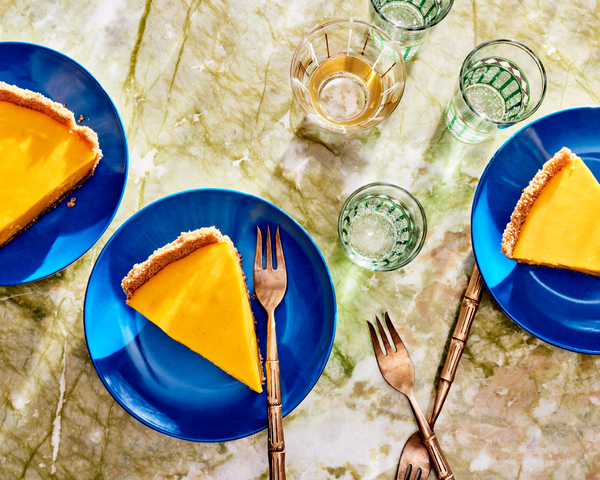 When Hrishikesh Hirway was a kid, his parents, who immigrated to the United States from Maharashtra, in western India, began hosting Thanksgiving. The meal soon evolved into a hybrid of a traditional Thanksgiving and an Indian potluck. “Out of that cultural mash-up, my mom started making this mango pie,” he said. She’d gotten the idea from other Indian aunties in the States, but their versions weren’t as good. “They weren’t making it with the best kind of mango,” Hirway explained. “The Alphonsos have a stronger, more intense flavor.” That Alphonso flavor shines as brilliantly as the pie’s bright filling, made tangy and rich with the addition of cream cheese and whipped cream. And the salty, crumbly graham cracker crust is the perfect foundation for the golden cloud of custard that sits atop it. It’s so satisfying that you'll catch yourself cutting sliver after mouthwatering sliver of pie.

For the graham-cracker crust:

For the mango custard:

KT2 days ago
When I foolishly tried to make tartlet shells in a mini muffin pan from the crumb mix, which promptly crumbled, I filled 5 oz Dixie chips with the custard. When the cups are frozen I’ll garnish the top with a generous portion of crumbs and call it mango kulfi. The crumbs are delicious!
Reply
This is helpful

KT3 days ago
How much ahead of serving is possible? Could the pies refrigerate for two days before serving? Or prepare custard and crusts 2 days ahead and assemble before serving?
Reply
This is helpful

BerkeleyBoy4 days ago
I fail at baked goods, but this came out perfect. Took one pie to an Oscar party and it disappeared. The other one in the fridge won't last long. Thank you!
Reply
This is helpful

Dawn1 week ago
The dimensions for the gelatin are incorrect, at least for Knox Gelatine. 2 and 1/2 packets of Knox gelatine are not even close to 2 tablespoons + 1/4 teaspoon. Which amount is correct?
Reply
5 This is helpful

Adapted from Kanta and Hrishikesh Hirway.